The legendary DAVID ROGERS in Concert at the Big Easel this Friday, March 31!! 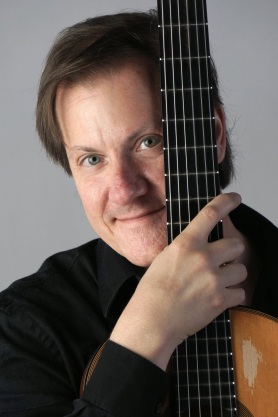 About David Rogers: Recently termed “a prominent guitarist” by the New York Times, David Rogers Fuses classical, jazz, early, and world music elements into powerful, moving and virtuosic performances based on both original and traditional repertoire. The Washington Post has praised his ‘astonishingly florid’ improvisations. He has been called a ‘modern master’ of the classical guitar’ by 20th Century Guitar. Classic…s today.com has praised his ‘first rate instrumental artistry,’ and the Lute Society of America Quarterly has called his technique ‘formidable.’
He is an endorsing artist for GHS Strings and his music has been featured in major guitar magazines such as Fingerstyle Guitar in the United States and Akustic Gitarre, in Germany. His performances have been broadcast on American National Public Radio and Bayrische Rundfunk, including both the nationally syndicated Performance Today (live performance/interview in Washington D.C. NPR studio 4A) and Harmonia programs. David has recorded for Dorian, Callisto and Focus Recordings. He has given recitals and conducted master classes throughout North America, including performances and classes at the San Francisco Conservatory and the University of Southern California and The Interlochen National Arts Camp.
David has studied historical plucked strings with Hopkinson Smith and Eugen Dombois at the Schola Cantorum Basiliensis in Basel, Switzerland; with Thomas Binkley at Indiana University; and with Lyle Nordstrom at Oakland University. He has studied guitar with Joseph Fava at Wayne State University. David was a musician with the Oregon Shakespeare Festival for 18 years and taught at Southern Oregon University for 13 years.